Born out of sheer frustration, this is probably one of my better attempts so far. I ran out of cash to build my intended 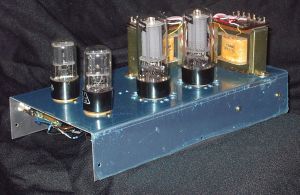 p-p momoblocks, so I decided to use a couple of output transformers that have been hanging around for years to build a little SE amp instead. The valve lineup is 1/2 6SL7 (voltage amp), 1/2 6SN7 (cathode-follower), 6L6 (triode-connected) per channel. Power istaken from the PSU shown on another page of this site. The HT finally worked out at 268v after a choke/capacitor (mounted on the amp chassis), which doesn’t really give me a lot to work with.The two little switches shown here are the remote control switches for the PSU. These allow Off/Standby and Standby/On switching, but I haven’t decided where to mount them on the chassis yet! 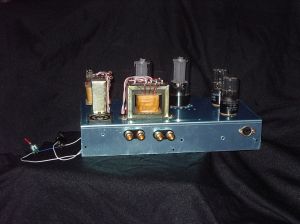 As you can see, Idecided to use a DIN signal connector. This was purely because I happened to have one, but they also have the advantage that I didn’t need to isolate the Ov pin from chassis (this is grounded via a resistor/capacitor in the PSU only).        The 6SL7 was inherited from my late father! I remember him having it in his “electronics” shed some 35 or so years ago. The 6SN7 came in a box of old valves given to me by a local TV shop that was throwing some “junk” out. The 6L6s were bought for the monoblocks originally, and are el-cheapo russian versions. I may get some better ones at some point, but not until I can afford some better output transformers. These will do for the moment.      Of course, the amp as shown isn’t properly finished yet! The light blue colour is just the anti-scratch plastic covering. A paint job is due, together with fitting the rest of the chassis & a transformer cover. It should be ok eventually. I hope….   🙂 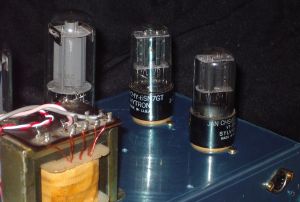 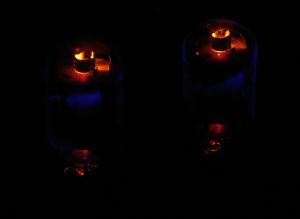